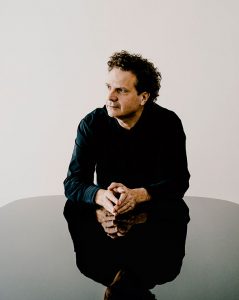 Coming from a rich tradition, pianist Andreas Haefliger “belongs to that elite group of interpreters…one of the most serious, questing pianists on the circuit today… breathtaking virtuosity…a complete Beethovenian” (Telegraph, May 2018). He has won many plaudits for his Beethoven Perspectives recitals on disc and at major halls & festivals, and is also much sought-after as a chamber musician.

Haefliger was born into a distinguished Swiss musical family and grew up in Germany, going on to study at the Juilliard School in New York. He was quickly recognised as a pianist of the first rank, and engagements with major US orchestras followed swiftly – the New York Philharmonic, Cleveland Orchestra, Los Angeles Philharmonic, Boston Symphony, Pittsburgh, Chicago and the San Francisco Symphony Orchestras among them. In his native Europe too, Haefliger has appeared with the great orchestras and festivals – such as the Royal Concertgebouw, Rotterdam Philharmonic, Munich Philharmonic, Budapest Festival Orchestra, Deutsche Symphonie-Orchester Berlin, Orchestre de Paris, London Symphony Orchestra and Vienna Symphony. He is well recognised as a superb recitalist, making his New York debut in 1988, and has ongoing regular relationships with the Lucerne and Edinburgh Festivals, and the Vienna Konzerthaus, as well as at major halls across North America and Asia.

Haefliger is a regular visitor to London’s Wigmore Hall with his Perspectives series, in which he performs the complete piano works of Beethoven alongside works by other composers from Mozart to Ligeti. This series has formed the focus of Haefliger’s solo recital appearances and CD recordings in recent years. His latest chamber music project gathers friends and top chamber musicians for intensive rehearsal periods and concerts every year at the Louisiana Museum in Copenhagen, with a tour in January 2019 to Rotterdam, Antwerp, Madrid, Bilbao and Hong Kong. He also continues to partner in occasional lieder recitals, most recently with Italian baritone Andrè Schuen.

In Summer 2019 Haefliger will give the world premiere in London of a concerto specially commissioned for him from compatriot Dieter Ammann, followed by the North American premiere with Boston Symphony and Susanna Malkki in the Autumn. Other future co-commissioners include the Wiener Konzerthaus, Munich Philharmonic, Luzern Festival (where he will appear with the Helsinki Philharmonic) and Taiwan Philharmonic.

Other highlights in 18/19 include Bartok 3 with the Wiener Symphoniker and Susanna Malkki at the Wiener Konzerthaus; Mozart and Ravel concerti with the Zurich Tonhalle Orchestra under Donald Runnicles at the Luzern Piano Festival; and returns to the Wigmore Hall, NCPA Mumbai, Aspen Festival (Mozart with Ludovic Morlot).

Haefliger recently signed an exclusive recording contract with BIS who released his latest Perspectives CD in Spring 2018; concerto recordings are in the pipeline. Haefliger began his career with Sony Classical recording Mozart sonatas followed by Schumann’s Davidsbündlertanze and Fantasiestücke, Schubert Impromptus, and music by Sofia Gubaidulina. Later Haefliger recorded for Decca with the Takács Quartet and also Matthias Goerne, winning the Preis Der Deutschen Schallplattenkritik for their disc of Schubert’s Goethe songs.

Analytics cookies help us understand how our visitors interact with the website. It helps us understand the number of visitors, where the visitors are coming from, and the pages they navigate. The cookies collect this data and are reported anonymously.

Advertisement cookies help us provide our visitors with relevant ads and marketing campaigns.

Performance cookies are used to provide information that helps increase the speed with which pages and content are displayed by third-party services.